This is what it looks like when an elephant treads on your foot:

Fortunately Matt was spared a more dramatic injury since we were in a river an hour outside of Chiang Mai washing said elephants at the time, and his foot sank into the sand below. Still, its massive toenail left an impressive mark. I was unaware of these developments as I was trying to tame my elephant at the time: being a young one it became overly excited when we reached the water and dived in head first. Whilst the others were sitting nicely letting their owners for the day give them a nice scrub, ours was rolling around with its legs in the air. This took place once we had learnt the basic Mahout commands necessary to ride the elephants, then fed them a gargantuan amount of bananas to sweeten them up to us doing so. 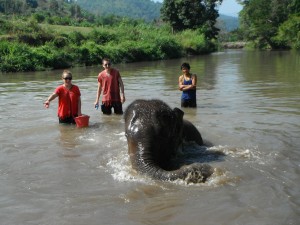 Our week in Chiang Mai was filled with many such activities, in honour of Jon joining us from Australia just in time for his birthday. White water rafting, a trip up to Doi Suthep temple, a night of Muay Thai boxing and a few thai massages were on the menu, as well as an introduction to Buddhist meditation at Wat Sri Suphan just outside the old town. It did not go well: pins and needles and an increasingly short attention span are just some of the obstacles making meditation a surprisingly difficult activity.

With little idea of what we were in for we boarded the night train back to Bangkok. The restaurant carriages on the night trains are infamously known as party cars: they put in a load of disco lights and crank the music up as loud as possible. What started as a quiet bite to eat quickly escalated into beers and Sangsom whiskey with, amongst others, a party of middle-aged French people celebrating their last night of a package holiday by getting smashed. The atmosphere was very surreal. Needless to say the second half of the journey was more subdued: Jon and I hanging our heads over a cup of coffee at 5am, and the eccentric American guy sharing our cabin making Matt crack up with tales of Bolivian prostitutes and Bangkok water lizards (“size of, like, a fucking alligator, with the head of a LIZARD man! Eats cats and dogs and chickens and shit!”). 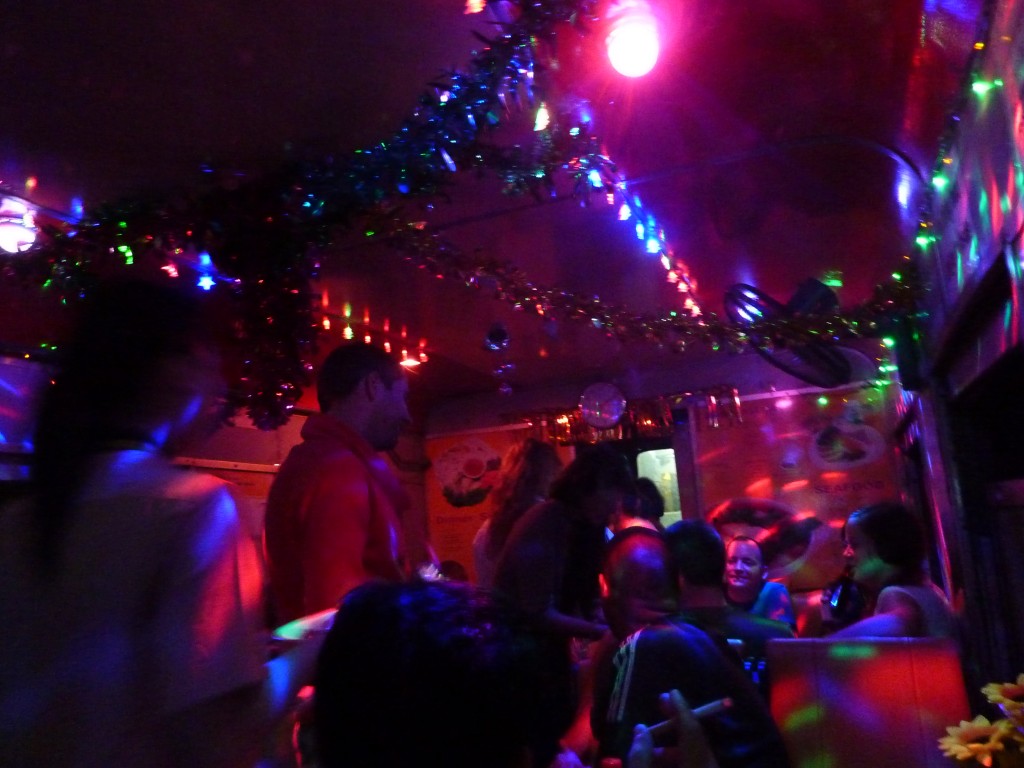 We head to the islands tonight, just in time for Christmas. It should be an interesting one, considering we’ll be sharing a dorm with a load of sweaty backpackers and the only way you can feel festive is to turn the air con right down and youtube some Christmas songs. Missing out on my favourite parts of Christmas (mulled wine and minced pies, roast dinners, Christmas telly- all the usual suspects) is a small sacrifice to be able to ride elephants and go white water rafting if it takes our fancy.

A question mark looms over our next step; Laos remains to be ticked off, there’s still loads to see in Thailand, we hope to go down to Malaysia and then spend some time in India on our way back. And my ever-dwindling bank account may just last me for another two months. How long will we last before having to come home and face real life once more?