This was my most bizarre Christmas to date. It started horrendously…

At 6.15am on Christmas Eve we got off the night train from Bangkok at Chumphon, on the coast. Failing to get a sleeper we had to sit in seats for 7 hours, which wasn’t too bad- although Matt only got half an hour’s sleep. At the station torrential rain was lashing down, and luckily a woman from the ferry company was running around herding people up to get on the bus to the pier because we had no idea where to go. We showed our damp tickets to Koh Tao and shivered in the freezing air con for the next half an hour. Once we arrived there was some confusion, as the boat was leaving at 7am. Jon went to ask at the desk.

The boat had left without us.

It wasn’t the end of the world; there were deck chairs where people could stretch out for a nap, and a food stall giving out free coffee and hot chocolate, so 5 hours passed quickly. But looking around at the ever-increasing crowds of people around the pier, we weren’t taking any chances and pushed our way to the front, backpacks and all, to be the first on the boat. Little did we know we’d want to be off it again almost immediately.

I was not prepared for the journey: two hours of relentless choppy waters, the ferry speeding along and taking no prisoners, meant there was soon a chorus of people being sick in their seats. The staff went around gravely handing out sick bags and toilet roll. After a particularly bad wave the ferry Christmas tree crashed to the floor where it lay for the duration of the tempestuous trip. I held on for as long as possible to avoid making Jon and Matt feel any worse, but no amount of travel sickness tablets could help and by the end we were all sick. It was the worst journey of my life. 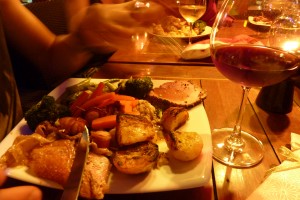 Saigon were staying down the road at Simple Life resort, which was having a Christmas buffet that night. They managed to get us onto their list for the fully booked event- so glad they did. The food was fantastic- as much turkey, gammon, roast potatoes and all the trimmings as you could eat (which turns out to be not that much) and even mince pies. The festive spirit took a turn for the bizarre with the ‘cabaret’ entertainment: a troupe of ladyboys dancing for our perplexed enjoyment. At one point dragged Matt and a few other unsuspecting victims away to don wigs and tiny sparkly tops, before coming back to dance to Gangnam style (he later admitted that had it been any other song he would’ve hated it, but he took to it like a duck to water). 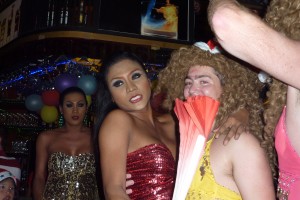 Feeling very full and happy we sat watching people doing fire poi and fire-breathing at a beach party, then went home to crash as soon as the fireworks marked midnight.

Christmas morning was spent by the beach with a fry-up, us dragging out the opening of our presents left by Mum and Dad when they came to visit for as long as possible. It was the first time we’d felt properly Christmassy as we got a little stocking of presents each, filled with all we wanted for Christmas at that point in time: pants, food and money. I also got a Thai phrasebook, perfect since I haven’t learnt a word of Thai since we got here.

Later on we went for a Christmas massage and soaked up the rest of the sun on the beach with a beer. After dinner we met up with the girls to watch Love Actually in their lovely hotel room, which is so much nicer than our $6/night dorm!
So a dramatic turnaround from Christmas Eve morning. Here’s hoping the boat to Koh Phangan in four days is slightly more forgiving…

One Response to Koh Tao Christmas