Niepy: the sound of silence

We’re on the beach in Nusa Lembongan, an island just southeast of Bali. The weather was 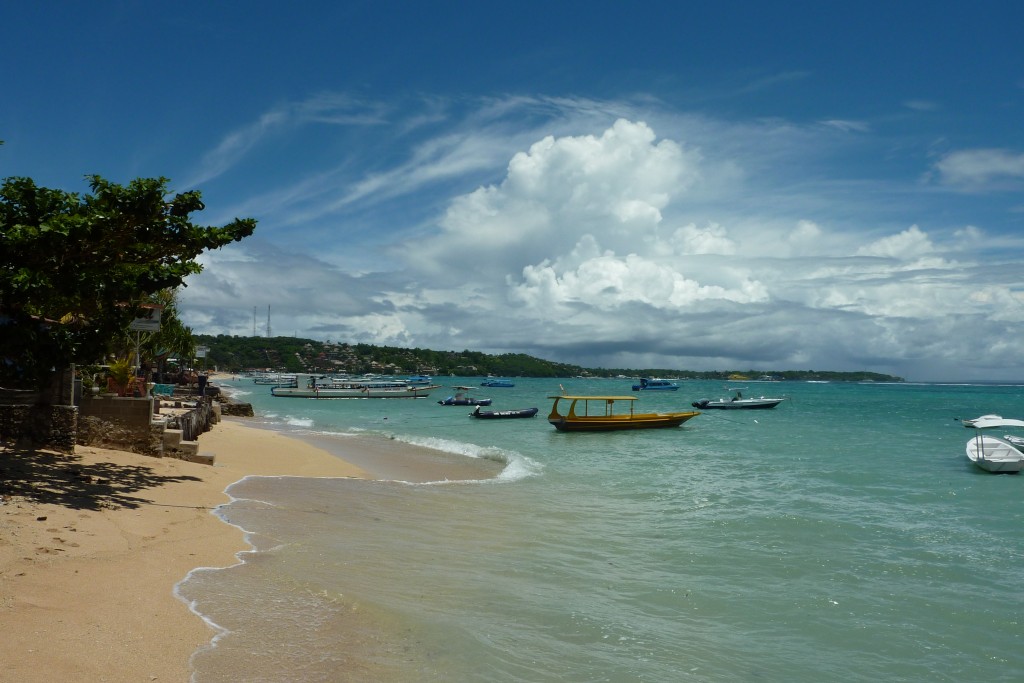 glorious for approximately one hour when we arrived yesterday, before it promptly turned (much, I’m sure, to the delight of people moaning about how cold it is at home) into a cold rainstorm which hasn’t stopped since.

Matt’s just flown here from Java where he spent two weeks with a couple of friends. He arrived covered head-to-toe in bites, nackered because of rats running around outside his room all night, with a shellshocked look in his eye because of what a barren wasteland Jakarta is. “Crap food, mean people,” apparently. To top it off one of our poor friends was struck down with typhoid the entire time. Travelling’s been a walk in the park for me in comparison!

So we’re upping sticks and taking Matt to where we spent last week: Ubud, one of my favourite places so far.

The place seems devoted to healthy living. On every street you find cafes specialising in vegetarian food, vegan food, raw food, cleansing juices and smoothies. There are flyers everywhere for detox courses, healing courses, massage and meditation courses. And of course, there’s yoga. In the time I spent there with Jon I went to a grand total of 11 yoga classes, determined to improve my shocking flexibility and ever-worsening backpacker’s posture. Safe to say staying there did me some good! It was the healthiest I’d felt since leaving 6 months ago. 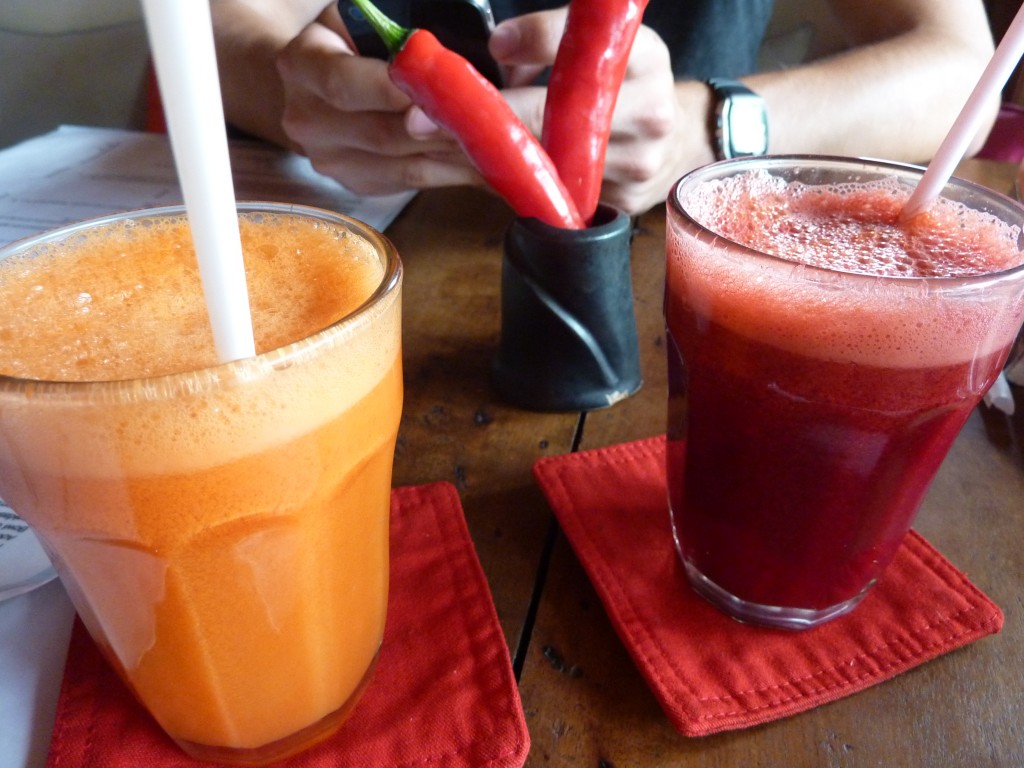 Too long there, though, and you start to realise you couldn’t stay forever. I’d become one of the women you come across in raw food cafes, you start to recognise them: they’re either surprisingly old or surprisingly young, talking non-stop (always slightly too loudly) to their expat friends about their yogi’s latest advice or forthcoming retreat, demanding dragonfruit smoothies and wheatgrass shots from waiters they’re on first name terms with.

When it got too much we made our way out of the town centre to stay in a studio apartment for the Niepy festival. This is one of the Balinese New Years (they work with two calendars), and involves a nighttime parade of twenty-foot ogre statues through the town (the Ogoh-Ogoh parade) followed by a ‘Silent Day’ of contemplation and rest. On the list of things you’re not allowed to do during silent day: use electricity, go outside, drive, cook, have sex, talk. We broke the rules and cooked anyway.
It was a fairly pleasant day; more or less like our New Year’s Day without the hangover. Although we had to be reminded by a lady from down the road to turn off our light when it got dark- apparently people actually come round to check and tell you off if you don’t! 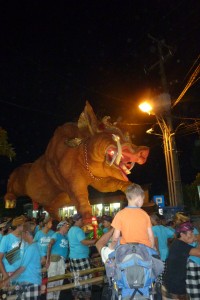 The real highlight was the previous night’s parade. We’d seen these massive papier-mâché ogres being built around town all week. On the night they all gathered in the central football field and began their procession through town, accompanied by cymbals and drums, with groups of Balinese girls carrying flaming torches. The idea with Niepy is that the statues represent all the evil spirits and bad things from the previous year, and they take them to be burnt after the parade, leaving way for a clean slate with silent day. It was a great explosion of colour and noise, actually quite scary in parts- particularly this one enormous pig statue with devil eyes complete with squealing pig noises. It was great until we got tired at about 9pm (a week of yoga’ll do that to you) and wanted to drive the 4km home- unfortunately we’d parked on the wrong side of the parade which was blocking the only road out of town. We sat on our scooter waiting for it to end, finally, at 11. By which point torrential rain was soaking us to the bone and making us glad of an excuse not to leave the house at all the next day.

So after a quick wellbeing-boost in Ubud we’re heading for the Kuta nightlife in time for Matt’s birthday. After that India has sadly had to take a backseat for financial reasons (we’re both broke) and because I’m pretty much ready to fly back to my own bed now. Before that though, it’d be a crime to return home without a tan- a couple of weeks on the Thai islands again oughta do it…