We’re in the Cameron Highlands, the tea capital of Malaysia. Enjoying a slow pace of life drinking tea with homemade scones and trekking the surrounding jungles after a hectic ten days whizzing through Singapore-Kuala Lumpur-Melaka-KL again. KL was characterised by the daily quest to stick to our budget in a city that prides itself on its shopping malls. I rarely succeeded. Decided that I’m much more content when out of the big cities and surrounded by countryside, a state of mind which I’m sure was influenced by the massage course which we completed a couple of weeks ago in the Lahu village, just north of Chiang Mai in Thailand. 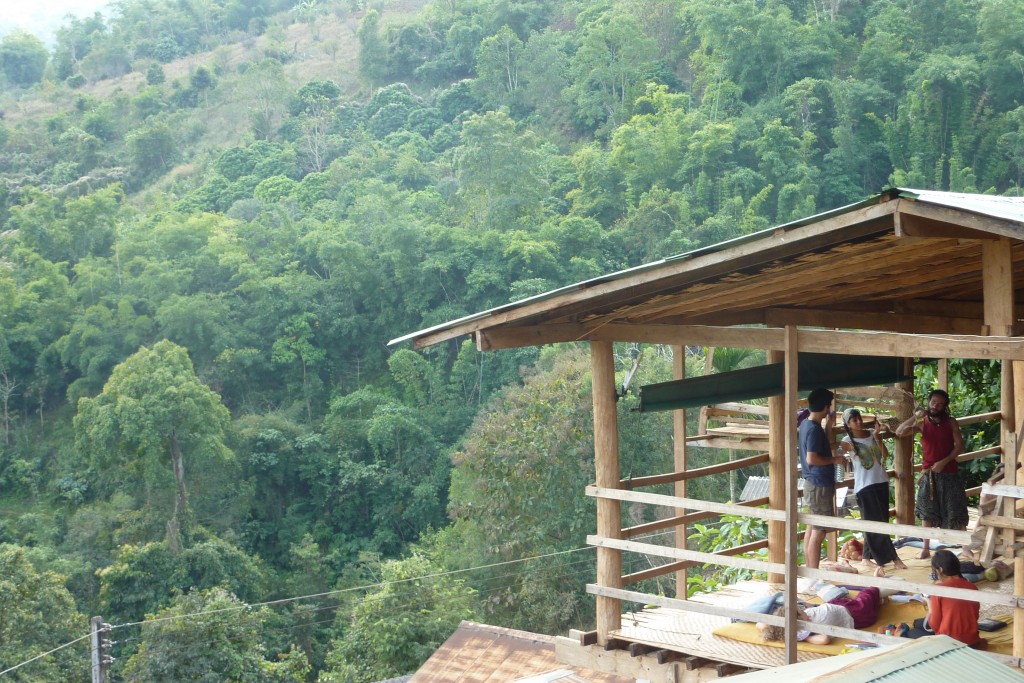 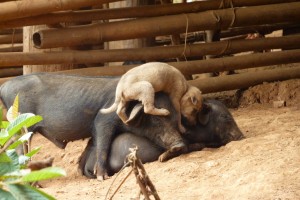 I’d read about the 12-day course in Backpacker magazine and booked us both in immediately. We were expecting maybe four or five fellow students; there were thirty of us and around ten instructors who piled into trucks to be driven up to the mountains.The village belongs to the Black Lahu tribe- once wanderers, now forced to settle by the government- and around 400 people live there, along with their puppies, piglets and baby chicks that run around generally being adorable all day. To say the daily routine was a break from our lazy backpacker norm is an understatement: 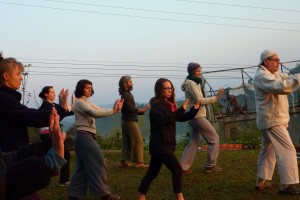 The lifestyle, I quickly realised, was wonderfully bizarre departure from what we’d grown used to. No meat or alcohol, obviously- our diet was rice-based vegetarian and as much ginger tea as you liked. Hundreds of cockerels both in neighbouring villages and deafeningly close to your hut would start their chorus long before sunrise- usually at about 3am. Our bed for the night was back to basics- thin mattress in a bamboo hut with a corrugated iron roof which belonged to a local family- electricity, wifi and private water supply were distant memories. Read my book by candlelight. Excellent international mix of all ages- hippies, yogis, massage teachers, full-time travellers and those who decided to give up the 9-5 in search of something new. The weirdest part of Lahu life was a clock which chimes from down in the valley and through the town on the hour from 5am-8pm; before it chimes it plays a different song (somewhat eerily, like a broken child’s toy) for each hour. Sometimes it’s Popeye, sometimes Beethoven. Its eccentricity was ignored by the locals who thought nothing of it- one girl said it’s like living in a spaceship. Very sci-fi. But I settled into the routine very quickly and loved it, having craved structure after 4 months of lazy backpacking.

The massage training got off to a rocky start- mostly because Matt and I quickly learned that we were among the least flexible people there, and Thai massage involves using your body weight in lunges and other positions uncomfortable without prior yoga training. We switched partners. There was a lot to take in every day- put together everything we learned

would take up to 4 or 5 hours to perform. In one particular exercise I dropped my partner’s knees, falling spectacularly in the process and causing her to laugh too much to ask if I was ok (I was), and during the final exam I treated the silent room to the sound of my trousers ripping at the crotch when squatting into another position. But epic fails aside, I grew to love it. Once you get into a sequence it’s very calming, with your mind just focusing on the task at hand, which is what we were learning to do during evening meditation.

With only a limited and not entirely successful experience of meditation in the past I already knew what to expect: inability to sit still and focus for 15/20 minutes; boredom; stiff legs giving way to knee pain; envy looking around the circle of perfect-postured students enjoying state of zen. On top of that add the sound of damn cockerels, pigs, Lahu families, kids letting off firecrackers, and on a couple of occasions raging thunder storms and rain spitting into the platform where we practiced, sitting on cushions and wrapped in blankets. We were taught Vipassana meditation; the first ten minutes involved focusing the mind on a task like counting your breaths up to ten, or repeating a chant in your head, then the next ten minutes were spent peacefully observing your breath, making a mental note of any sounds, thoughts etc which came. Easier said than done when you’re meditating in a cacophony of noise. There was one successful night in the ten consecutive evenings of practice, however. After some advice from a yoga-teacher friend about how to sit more comfortably, and a particularly useful preamble from the instructor about how your irritating thoughts are just obstacles thrown up by your mind to keep itself entertained, I fully got it: all my usual brain-chatter about what I was going to have for breakfast and what I was going to do with my life when I get back home came with less intensity and quickly collapsed in on themselves. That is, until the next night when my knee hurt like a bitch again and I just felt generally hungry. But still, a generally more positive experience than last time. 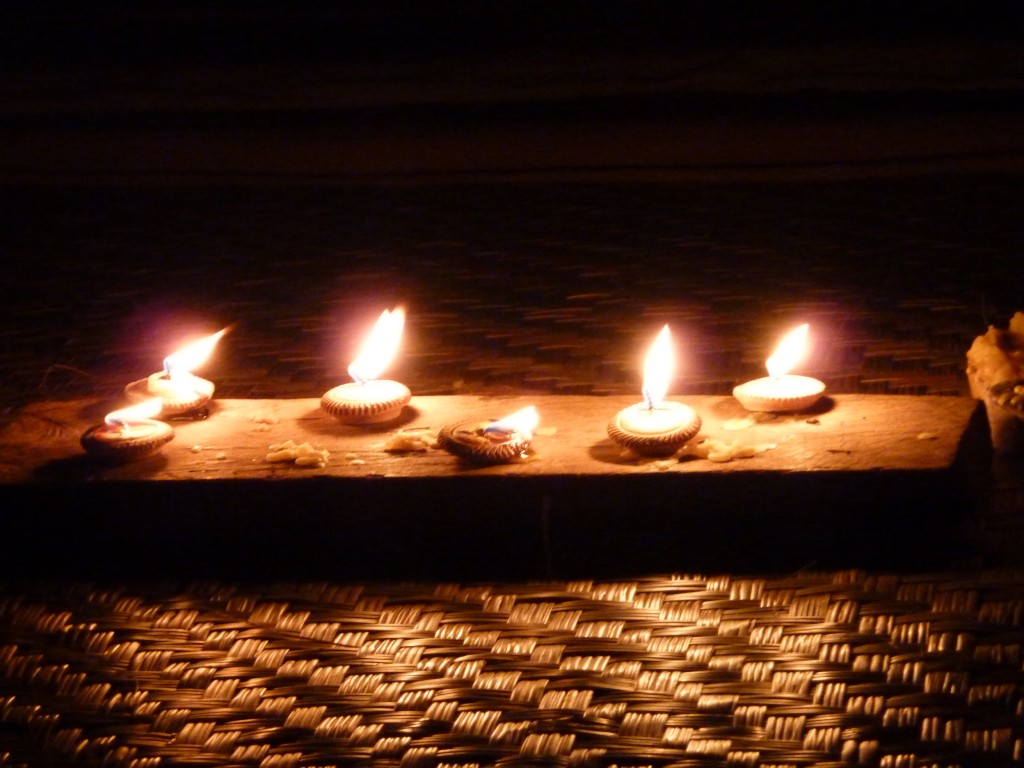 I was sad to leave, possibly because I’d miss waking up to the spaceship clock and being up and Tai-Chiing as the sun was rising. Also because I’d made some great friends, felt healthy for the first time in months and knew that soon I’d be back to our beer-guzzling backpacker ways. Though I’m not waking up at 6am and chanting om mani padme hum before starting my days the meditation has been valuable when unable to sleep when my mind’s in overdrive. Also have started doing more yoga with plans to practice more in Bali and India (Ubud and Rishikesh, respectively), mainly to no longer be put to shame by people twice my age and infinitely more bendy than me. As far as vegetarianism goes, though- just love bacon too much. Sorry, piglets. 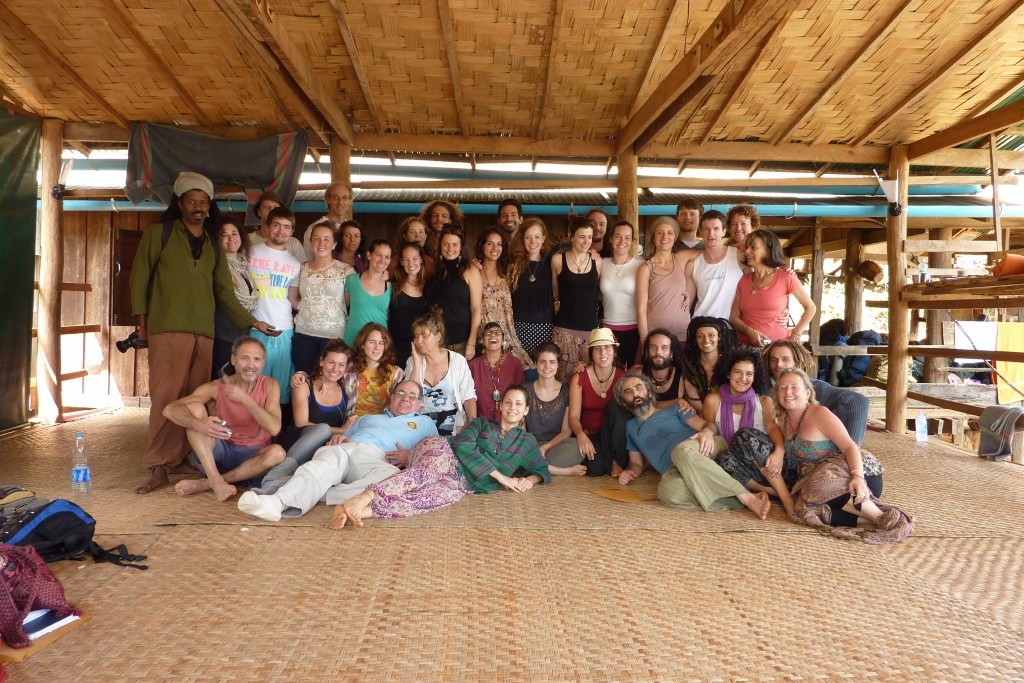 One Response to Lahu Life