We’re finally out of the capital! We ended up staying in Hanoi for various reasons- illness, poor organisation, extended beerpong-induced hangovers.. but the silver lining was that by chatting to one of the guys at the hostel we heard about the Phong Nha Farmstay. Since it’s only two years old it’s not in our slightly outdated Lonely Planet, and the combination of cool cave tours and a laid-back lifestyle sounded perfect. We booked in for four nights. 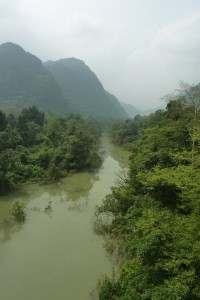 Within half a day I never wanted to leave. Rainy days were spent reading in a hammock, cuddling the puppies that run around, enjoying the view of rice paddies and mountains, and working on my pool game. The highlight of the second day was taking a bike tour through the neighbouring villages just as kids were coming out of school in the morning- their screams of “hello!! HELLO!!” and high-fives made us feel like celebrities. At one point a motorbike with one adult and no less than 4 kids whizzed past, the children just going mental at the sight of us. The tour led us to one side of Phong Nha Ke-Bang national park and into Dragon’s Breath cave, which was pretty cool. But that was simply a warm-up for the next day: an incredible tour through the national park and to Paradise cave.

The landscape is stunning, with the same jagged limestone peaks that form Halong Bay rising above a self-contained river- it flows up from a spring 50m deep and seeps away into the rocks. We were given loads of information about the nature and history of the park, in which most of the greenery was wiped out by Napalm.
In the heart of the park lies Paradise Cave, which is a hundred times more amazing and surprising than Halong Bay’s Amazing, Surprising Cave, and with infinitely fewer tourists. The icicles of stalactites and towering stalagmite columns that loom in the enormous chambers give the impression of being underwater, which is heightened by the murky shadows thrown by simple, white lights. 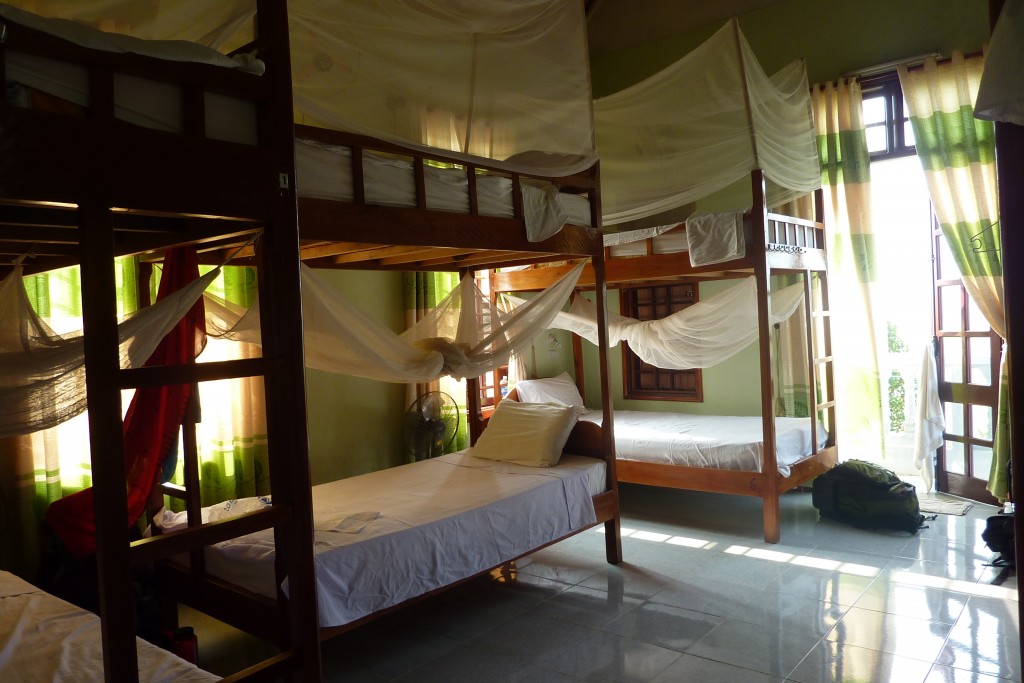 Dorm room at the Farmstay

Without ruining the surprise for any potential farmstayers, I’ll just say they save the best til last- Dark Cave. One life jacket. One headtorch. Bats. At just under £30 it was the best tour we’ve done here, and the farmstay itself was amazing value- 170,000D (£5.15)/night for a dorm bed.

Once fully relaxed it was into a 5am transit van for a very squished ride down south, fully wedged in by Vietnamese people, huge sacks of rice, and all our luggage in the back, which was rearranged to make room for a motorbike. Only in Vietnam. Hué was more fun than we’d been told- a few good bars and more Happy Hours than there are hours in the day- but in terms of sightseeing it was more or less a write-off. We managed an hour of perusing the market and 40 minutes in the very beautiful Citadel before we went back to have a nap…

It was really only a stop-off on our way to Hoi An, as it is for most people- and for good reason. With it’s tailor shops, plethora of bars and restaurants, and adorable yellow-walled old quarter  dotted with red lanterns, it’s like this town was tailor-made for me. Within two hours of strolling around I’d already spent $40 on two dresses to be made, and I have a horrible feeling I’ll be spending more. Every single shop has beautiful clothes, shoes and bags. Hanoi it is not.

There aren’t really any hostels here, which is fine by me! Bye bye dorm room full of smelly boys, hello Hoang Trinh Hotel. Lovely en-suite room, balcony, fairy lights and friendly staff who greet us with a mango smoothie when we get home. (Sorry, Mum- not home. ‘Temporary accommodation’…) Today we’re doing a cookery course, and planning on cycling to the beach on Friday to sort out this uneven tan which has given us both seemingly permanent T-shirt and sandal marks!

And finally Sapa, which was so long ago now because my blog-keeping has been woefully poor. We found out the hard way that you have to book train tickets a few days in advance,  so instead of hanging around in Hanoi for even longer we gave in and booked a tour with Vega. We were apprehensive at first when we found that the other six people in our group were all Spanish, but by using a mixture of broken English, French and miming we had a laugh with the couple in our sleeper train compartment. Our guide, Quan, led us up some intensely steep sections of bamboo forest and down unending slippery mud slopes, chain-smoking and laughing the whole way, whilst never breaking a sweat. 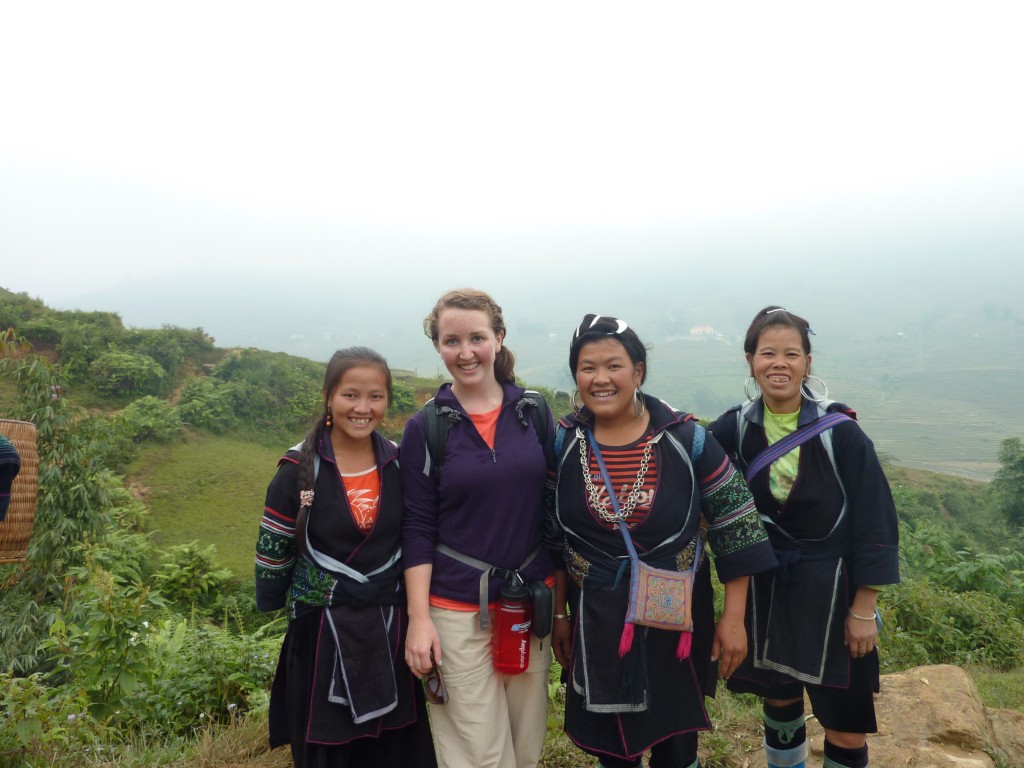 We were accompanied on the first day by a group of women from the Black H’mong community, who walked with us to their village four or five hours away. The different tribes in Sapa wear certain distinguishing outfits, and they wore dark cotton cut across with intricate embroidery in fantastic colours, and some added bright checked headscarves. Often their fingers are a deep blue colour from the indigo used to dye the bags and pillow cases which they embroider to sell. My friends for the day were Li and Chu, who darted up the montain alongside me, pointing out footholes and giving me a hand in the really muddy sections. And giggling every time I slid on my arse. Because they were so helpful I didn’t mind buying a couple of bracelets and a purse from them at the end of the day- of course, this meant I was bombarded with about 20 other persistent girls who knew just how to make me feel guilty about not buying from them..

We ate and slept at a homestay, which was a great experience- the family, with a little help from Quan, cooked us a feast of stir-fried beef and vegetables, chicken and mushrooms, and a mountain of spring rolls. By 8pm we were so exhausted we went up to the thick mattresses and duvets laid out under mosquito nets on the mezzanine and had the best sleep ever. Waking up to the sound of birds, insects and the nearby waterfall in the forest  was something which I definitely hope to repeat.

Next stop, the beach!